A handful of museum objects 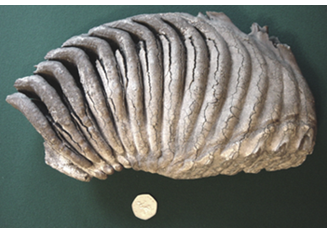 Our elephant's tooth was excavated from the bottom of the moat at Penrith Castle. The Ministry of Works found the tooth in July 1921 it was below the north east elevation of the Castle.

After the tooth was found an article appeared in the Cumberland and Westmorland Herald where Dr J F Haswell, a physician and vice president of the Cumberland and Westmorland Antiquarian and Archaeological Society, was reported as saying to Penrith Literary and Scientific Society during a guided tour of the castle 'it was somewhat peculiar that the only thing discovered in the castle moat was an elephant's tooth.'

Radiocarbon dating of the Elephant's tooth

In March 2015, radiocarbon date testing of a sample of tooth was carried out by CHRONO Centre, Queen's University, Belfast.

The radiocarbon dating was made possible by a grant from the Cumberland and Westmorland Antiquarian and Archaeological Society of £200 together with £60 from the Friends of Penrith and Eden Museum.

A medieval date might suggest the tooth was once owned by a person of high status associated with the Castle, this may have been Richard, Duke of Gloucester. The Middle Ages saw a cult of relics and fabulous objects with which archaeologists recently linked the finding of an elephant's bone from a dig in Chester city centre. However, a more recent date may suggest a link with a travelling circus. 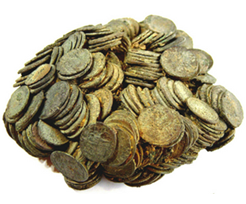 The Roman coin hoard consists of over 600 bronze coins. It was found at Newby near Shap by a metal detectorist. The coins are mainly Constantinian issues dating from about AD 320-340. Most of the coins are fused together in a 'ball' due to having been buried for over 1,600 years. They had probably been in a leather bag. The find was reported to the Coroner under the Treasure Act (1996). The coins were valued at £700 and were bought for the museum by the Friends of Penrith and Eden Museum. 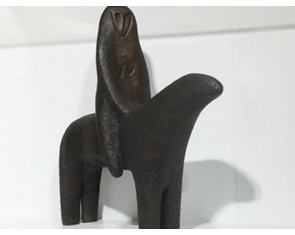 'The Rider' combines elemental forms of 'animal' and 'woman', two of the archetypal motifs that Graves developed and used in much of her artwork, in a variety of media, most notably ceramics. The artist lived and worked for the greater part of her life in the Eden Valley. Her inspiration came from a deep sense of the spiritual connections between humans, the landscape and the living world. The monuments and artefacts of Neolithic and early Bronze Age people who lived in this area between 6000 and 4000 years ago held a special fascination for her. She once wrote: 'the power and effect of prehistoric monuments is to trigger memories of belonging.'

Druid cutting down the mistletoe by Jacob Thompson 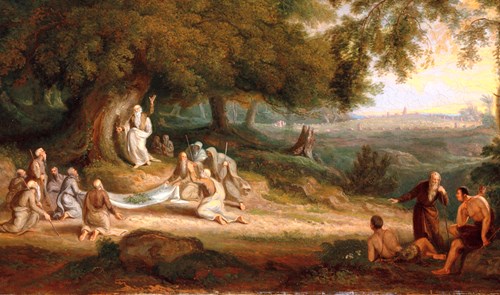 The painting shows Druids performing a ritual in a wooded clearing in the Eden Valley. The magnificent Bronze Age stone circle of Long Meg and Her Daughters is clearly visible in the distance. According to the artist's biographer, Llewellyn Jewitt, the painting was commissioned by Colonel Samuel Lacy, owner of the monument and surrounding land. The painting provides an evocative example of how prehistoric sites were admired and represented by British artists in the eighteenth and nineteenth centuries, appealing as subjects both to the prevailing Romantic sensibility and the taste for picturesque scenery and antiquities. 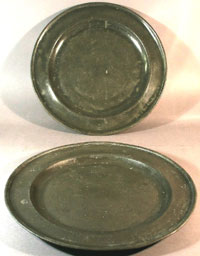 In the 17th and 18th centuries Penrith was well known as a centre for the pewter trade. These large pewter plates were made by Abraham Crawley (1698-1760), the best known and most prolific of the Penrith pewterers who was working between 1720 and 1760. He was a churchwarden at St Andrew's Church in 1743, along with William Porthouse of the famous clock-making family. He owned several houses in Penrith and also property at Eamont Bridge.

Purchased in May 2012 by the Friends of Penrith and Eden Museum.