From the summer of 1938 Council staff at the Town Hall and Mansion House were involved in the surveying of accommodation for future billeting of evacuees. On 31 August 1939, in preparation for the arrival of evacuees the following day, arrangements were made for the emergency food rations previously stored at the Railway Goods Station to be delivered to Brunswick Road School. These included 2544 tins beef, 4032 tins milk, 4000 bars of chocolate, 300 tins biscuits and 2000 carrier bags which were packed and distributed to the evacuees on arrival. 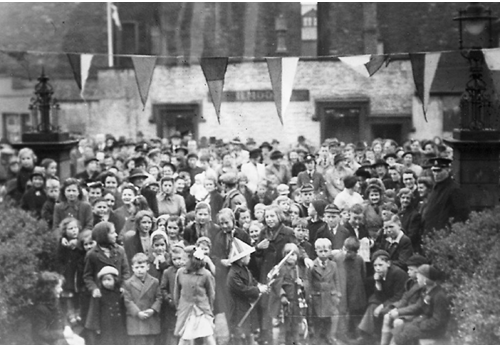 The Town Hall became the centre of civic activity. Not only were there regular gatherings of evacuees and refugees, but also Belgian, Norwegian, and French National Days. Entertainments for the relations of prisoners of war, children’s parties, USA troops and foreign journalists were all held there. In addition there were regular meetings of Emergency Committees, Fire watchers, the War Savings Drives, Red Cross Appeals, as well as YMCA and Ministry of Information films.  Civil Defence was closely associated with the Town Hall, its Report Centre functioning in the basement, while the whole building was given up to many exercises. On one occasion the stairway was completely occupied from 1am to 9am by Home Guard ‘prisoners of war’.

On 8 May 1945, VE Day, Winston Churchill’s announcement of the end of the war was broadcast from the Town Hall steps to the assembled crowds outside. After his speech Mr C H Huntley, Clerk of the Council, and Councillor J E Irving, Chairman of the Council, addressed the crowd. Congregational Minister Reverend Tom Cross was there with his camera and his photographs are now in the Penrith Museum collection.

Home front in Penrith and Eden

See Home front in Penrith and Eden to find out more about this area during the Second World War and the important part that Eden played in the national and local picture.