The images below are taken from the book 'Penrith: A Historical Record in Photographs.

Photographs from Penrith: A Historical Record in Photographs 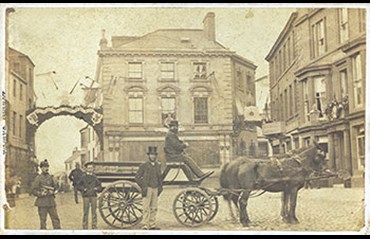 Local photographer J Lomax captured this scene in Devonshire Street which was probably taken at the time of the town's celebrations for the marriage of the Prince of Wales with Princess Alexandra of Denmark on 10 March 1863. The words 'Prince of Wales', though faded, can be deciphered on the decorated arch. 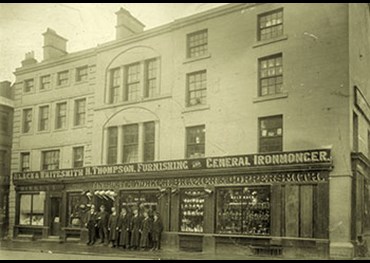 A quality hardware shop, Henry Thompson's Ironmongers displays its wares the range and diversity of which is staggering by current standards. Thompson had acquired the business from Nesfield Robinson in 1886 after working for Mr Robinson for twenty-four years. In 1908 Henry Thompson moved to Castlegate and the property was subsequently demolished. The present bank building was erected on the site in 1912/1913.

Welcoming party for the arrival of the Kaiser at Penrith station, 1895 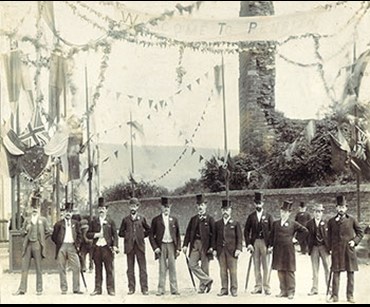 This photograph showing members of Penrith's first Urban District Council was taken near the railway station on 14 August 1895 as they awaited the arrival of Kaiser Wilhelm II en route to Lowther Castle as the guest of Lord Lonsdale. On the left is the Clerk, Mr George Wainwright, with Councillors Thistlethwaite, Fleming, Sweeten, Fairer, Slack, Scott, Ingledew, Altham, Winter and Neville. Two members, Councillors Seatree and Glasson, were not present.

Buy and order Penrith: A Historical Record in Photographs

Complete the 'Penrith - A Historical Record in Photographs book' order form (PDF: 26Kb / 1 page) to order and buy your copy of the book.

All photographs are copyright Eden District Council. There are terms and conditions regarding the use of the museum's photographs for commercial purposes or in publications. To find out more about using the photographs contact the museum's curators on the contact details below.