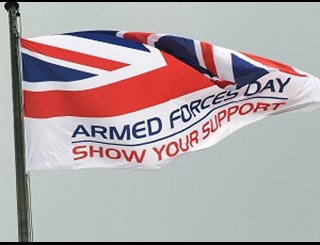 People from Eden are being invited to join a ceremony on Armed Forces Day, Saturday 29 June 2019 at Penrith Town Hall at 10am.

This is part of a countrywide programme of events to celebrate and recognise HM Armed Forces and is being hosted by Eden District Council’s Armed Forces Champion, Councillor John Thompson.

Armed Forces Day is the annual national campaign that gives everyone the opportunity to show their support for the men and women of the Armed Forces past and present, including those currently serving, service families, reservists, veterans, members of the ex-service community and cadets.

“We are always delighted to proudly fly the flag to celebrate Armed Forces Day, which symbolises the contribution the Armed Forces have and continue to make to our country. We would be delighted for the local community to join us for this ceremony to pay our respects to those who serve our country," said Eden District Council’s Armed Forces Champion, Councillor John Thompson.