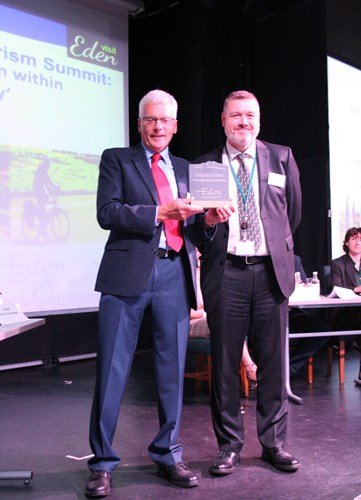 The inaugural Inspiring Eden Award was this month presented to one of the area’s eminent tourism leaders, Jim Walker, for his years of outstanding contribution to the local economy and to the Eden Tourism Network.

Jim has over four decades’ experience working in Cumbria’s £2.6 billion tourism and hospitality sector, and is currently the Chair for the Eden Tourism Network and President of Cumbria Tourism.

Deputy Leader and Portfolio Holder for Economy and Enterprise at Eden District Council, Cllr Mary Robinson, said, “We are delighted to present the first Inspiring Eden award to Jim who is a long-standing ambassador of the visitor economy in Eden. Jim has chaired the network for over ten years and has been passionate about developing and supporting the businesses to create an outstanding visitor destination, which also has huge benefits to our local residents and local communities”.

The new award has been launched by Eden District Council, as part of its Inspiring Eden initiative, to recognise excellence and innovation in the local economy.

Twelve awards have been designed and produced and will be used to recognise the organisations and individuals in Eden that demonstrate a strong commitment to achieving rural excellence within the local economy.

Cllr Robinson added, “We are still inviting award nominations from all sectors of our diverse economy. This is your chance to help us celebrate the very best that our Eden economy offers.”

To nominate an individual or business for an Inspiring Eden Award, email econ.dev@eden.gov.uk with the name of the business or person being nominated, your reason for nominating them, and your name and contact details.