Council Leader flies the flag for Eden at UK100 event

Leader of Eden District Council, Cllr Virginia Taylor, was in attendance at the UK100 Leader’s Dinner in Harrogate last week. 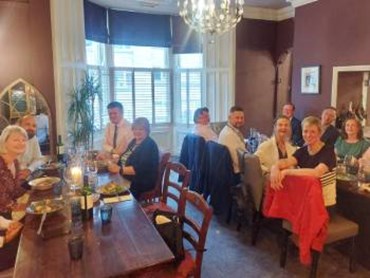 Dinner guests discussed the progress being made on the delivery of Net-Zero locally, as well as challenges faced and best practice on how to overcome them.

Cllr Taylor said, “It was very generous of UK100 to entertain us all and I am honoured to be part of such a prestigious and ambitious organisation, and once again - after UK100’s brilliant think-tanking at COP26 - in such stimulating and creative company, hearing about effective projects and innovations.”

In October 2021, Leader of Eden District Council, Cllr Virginia Taylor, signed up to the UK100 Net Zero Pledge. The pledge commits local authorities to reducing their own emissions by 2030 and that of residents and businesses by 2045, five years ahead of the government's target.

Eden District Council has gone one step further and committed both itself and the Eden district as a whole to becoming carbon neutral by 2030.

Cllr Taylor added, "I’m delighted that Eden District Council is part of the UK100 network and that we are part of the only association of Local Authorities across the UK committed to bringing each constituent council’s emissions to Net-Zero by 2030.

"Membership of the UK100 puts the Council in national and international forums for sharing best practice and is helping to progress Eden’s climate change objectives and biodiversity commitments."