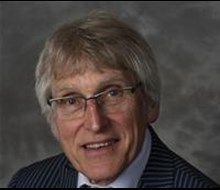 At the annual council meeting on 16 May 2019, Council elected Councillor Andrew Connell as Chairman of Eden District Council.

Role of the Chairman

Invitations to the Chairman