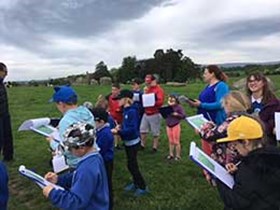 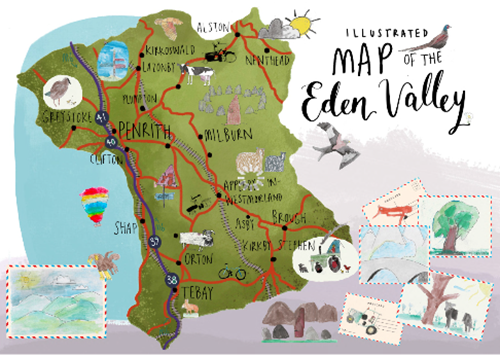 The Eden landscape is full of prehistoric monuments and sites of major archaeological importance, which have long inspired the work of local artists. The Landmarks of Eden project, supported by the Heritage Lottery Fund, set out to explore one of those sites, the stone circle named Long Meg and her Daughters, near Little Salkeld.

The project worked with four local schools who visited the stone circle and found out about the ways in which artists have engaged with the monument. Over four individual project days, pupils learned about the Neolithic in Eden, whilst discovering the work of Cumbrian artist, Lorna Graves. Following a site visit of Long Meg stone circle, each class transformed their newly-found knowledge, ideas and experiences into writing, in a creative writing and illustration workshop. This formed the basis for an illustrated map of the Eden Valley.

Download the illustrated map of the Eden Valley (PDF: 73 Kb / 1 page), which enabled the students to learn about the heritage on their doorstep. Spending an enjoyable time together was key for the project. 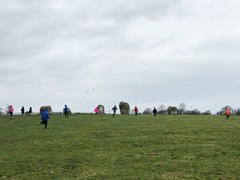 A strange sight on a Lakeland morning: A colourful crowd of children in wellies and raincoats is running along the edges of a wide stone circle, touching the stones as they run past and shouting out numbers. Three times, they ran around the circle. Why? - To break the spell of the wizard and release the sleeping family of witches. 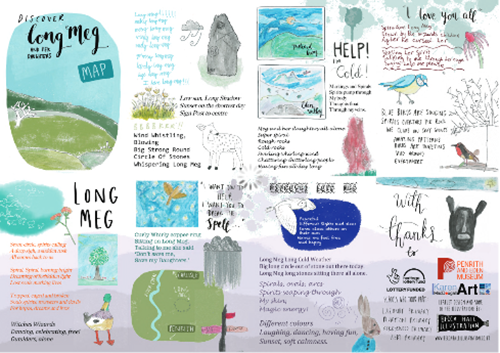 The project that the museum ran with four schools from the Eden Valley, demonstrates the strong hold that Long Meg stone circle has on the imagination. The project day we hoped would underline the different uses of the monument, its ritual importance and its continuing power to elicit an intensive response with those who come to visit it today and the artists whose work it has inspired.

The stormy weather we experienced on one of the days, the running, walking, map-reading and dowsing which we did during the day, helped the pupils to experience the familiar landmark in many different and unexpected ways. The stories and folklore connected with it, which we told during the sessions, captured participants' imagination and conjured a sense of place, which they described as 'eerie' as they tried to listen to the stones whispering.

Being on site and experiencing the stone circle first-hand meant that students could relate with the work which Lorna Graves, Jacob Thompson and William Wordsworth created, inspired by the monument. Lorna's close spiritual connection with the stone circle and her interest in the prehistoric rock art was a strong theme of the workshops. Many pupils commented on the way in which Lorna constructed her sculptures. Long Meg amazed the students. Like Wordsworth, they were in awe of it, its size, its age, and the sheer number of stones. The students retained a lot of information from the site visit and workshop about the monument, including its construction and its size in relation to other stone circles in the UK.

The creative writing exercise, and illustration workshop in particular, show the intensity and creativity with which the students engaged with the work of Lorna Graves and the artistic heritage and history of Long Meg. The project engaged all the senses, encouraged students to be observant and mindful of their environment and allowed them to have an enjoyable day. In one of the poems written during the creative writing exercise, a pupil described their class as 'chattering chitterling people, having fun all day long'. 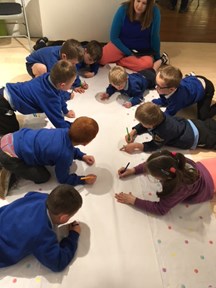 The following poems, written by pupils in response to their experiences at Long Meg stone circle, show the power of imagination and creativity with which they composed them:

'Stone circle, spirits calling
A deep sigh, a sudden rush
All comes back to us'

We took all quotes from the finished Landmarks of Eden Map and creative writing exercises.

The work of Lorna Graves and Long Meg stone circle

Long Meg and Her Daughters is the largest stone circle in Cumbria, located near the river Eden near Little Salkeld. The stone circle had a prominent position in Lorna’s work. It is a site which has long inspired the imagination of writers and artists, amongst them, Jacob Thompson, William Wordsworth and Thomas Wilkinson of Yanwath.

The stone circle is a place of heightened perception, of the self, the surrounding landscape and their unity. In her writing, Lorna imagines herself as a perceiving being, lying between the layers of the earth. Thompson and Wordsworth had already marked the stone circle as a place of strong emotional response and awe: gathered near the stones the druids of Thompson’s painting signify the spiritual relationship with nature, whilst Wordsworth describes the 'weight of awe' that befell him when he first laid eyes on the monument.

Lorna lived near Long Meg for many years and came to know the stones in every season and weather. Lorna described in detail the phenomenon of the Helm Wind, which she saw at Long Meg, a strong north-easterly wind that blows down Cross Fell and can blow fiercely for several days in a row. Long Meg is the setting of another strange weather phenomenon, said to have taken place when the owner of the stone circle, Colonel Samuel Lacy, decided to blow up the circle and a thunder and lightning storm put an abrupt end to the attempted destruction.

Lorna used the elemental power of the stone: strong, solid and timeless, as an image. Lorna produced many sketches and sculptures of the standing stones.

We delivered the project with participation of Asby, Kirkoswald, Lazonby and Plumpton schools and with support from Bernadette Calvey, Education Development Manager. The artist, Karen MacDougall, ran the site visit and creative writing sessions, and artist and illustrator, Becca Hall, ran the illustration workshops.

The Heritage Lottery Fund award, 'Sharing Heritage', meant we were able to run this project.